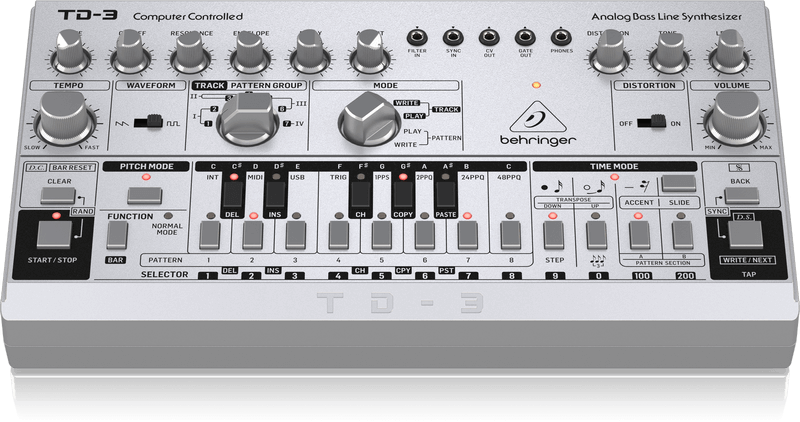 Behringer has announced its new analog acid synth, the TD-3. Something that has been rumored for a long time, the synth producer has officially announced its clone for the TB-303, the machine that set off the acid house revolution.

There have been quite a few 303 synth emulators over the years, either as software plug-ins or hardware that uses analog emulation technology. The TD-3 uses real analog circuitry to create its squelching acid sounds.

According to Behringer, their new synth has “authentic reproduction of original circuitry with matched transistors” and “pure analog signal path based on legendary VCO, VCF and VCA designs.”

The 303 synth comes with a slew of features including, sawtooth and square waveform VCO with transistor wave-shaping circuitry, 4-pole low-pass resonant filter, an arpeggiator, 4-pole low-pass resonant filter with cut-off, resonance, envelope, decay and accent controls and a 16-step sequencer with 7 tracks, each with 250 user patterns and more. It also has a 16-voice Poly Chain to combine multiple synthesizers for up to 16-voice polyphony, plus 11 controls and 28 switches to give you direct and real-time access to important parameters.

There is an additional distortion unit modeled after the Boss DS-1 distortion pedal to add even more options when creating your acid sound.

While nothing will beat the original, getting a TB-303 can cost thousands of dollars. Released in 1982, the TB-303 was a commercial flop, but gained new life by electronic music producers to create what eventually became acid house. Behringer, known for the clones of older synths, will be selling the TD-3 starting at $150 to $200, depending on the vendor and sounds really close to the original. It comes with a 3-year warranty program and is manufactured in Italy.

The synth comes in blue, red or white colors and is available to pre-order now. See a video from Behringer to see just how the new synth operates.