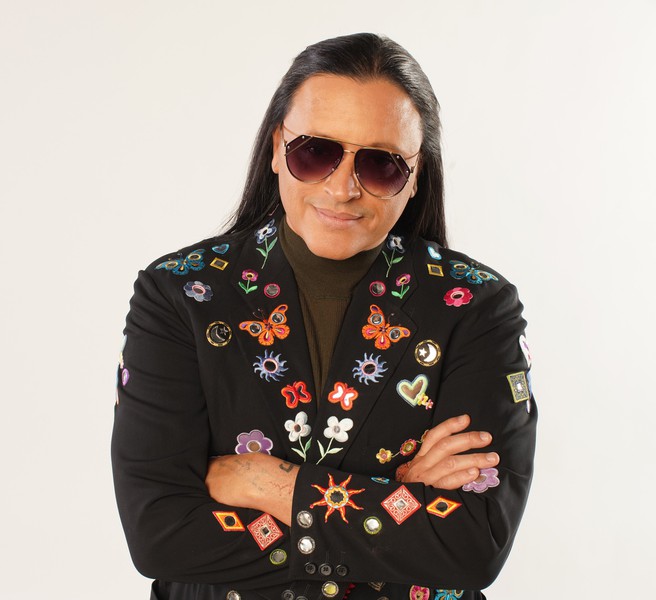 Elvis Crespo is the only Latin artist whose music has been played literally in outer space and was the first Latin artist to have the longest charting Tropical genre single at the top of the Billboard charts. His music has been permanently marked on cans of Coca-Cola and has been featured in some of the most emblematic TV series including House of Cards and Dancing with the Stars, among others. Spain’s National Football Team celebrated their 2010 World Championship win chanting one of his songs, and even President Barack Obama grooved to his music at the Hispanic Congressional Caucus Awards in Washington D.C.
In 2016, Crespo reinvented his sound and pairied up with DJ Deorro to produce the electronic dance and tropical infused track “Bailar” which reached #1 in 10 countries in Europe and Top 40 on the Billboard Hot 100 charts. In 2018, he delighted audiences by uniting forces renown DJ Steve Aoki, Latin superstar Daddy Yankee and producers Play-N-Skillz on the single “Azukita” which earned multiple gold and platinum records worldwide, surpassed 300 million streams on You Tube and earned multiple award nominations.
With a career spanning over 2 decades and the upcoming 20-year anniversary of his record-breaking album "Suavemente", Elvis Crespo continues to leave his mark in the music industry with 27 Billboard charted hits under his belt.
Elvis was born in New York City, on July 30, 1971, and moved to Guaynabo, Puerto Rico with his family at the age of six. There, he developed two of his biggest passions: music and baseball. As a kid, he dreamed of being in the group Menudo and would later aspire to becoming a professional baseball player.
In baseball, Elvis would not find his place as a player but shined in team management. Through time, he kept pursuing his passion for music, and at the age of 17 he joined the Willie Berríos, Lenny Pérez and Toño Rosario orchestras. His career-changing moment occurred in the mid 90’s when became a member of the popular music group, "Grupo Manía," for which he played a role as singer-songwriter. Crespo penned one of the groups biggest hits “Linda eh,” which would help him gain the attention of multi-national label Sony who would offer him a contract as a solo artist.
His debut album, “Suavemente”, reached #1 on 5 different Billboard charts, and two of its singles, “Tu Sonrisa" and “Suavemente”, became massive global hits. “Suavemente” went #1 on the Billboard Hot Latin Songs chart and remained there for seven weeks, becoming the longest-lasting Tropical song at the top of a national chart list. Crespo made history by becoming the first artist on the Sony Tropical artist roster to sell over a million copies in the US and over 4 million worldwide. As one of the most sought-after artists of his genre and releasing multiple solo albums, in 2010 the undisputed king of merengue-fusion released his 8th solo album “Indestructible,” an album that symbolized overcoming obstacles and which solidified Crespo as a successful singer, songwriter, producer and actor.
His music has broken worldwide language barriers and his trademark songs still play from his native Puerto Rico to countries like Venezuela, Colombia, Bolivia, México, Guatemala, Panamá, Honduras, Costa Rica, Ecuador, Perú, Chile, Argentina, Dominican Republic, Australia, Dubai, Israel, Spain and the U. S., among many others.
Expanding his musical trajectory from tropical sounds into a fusion of tropical, pop, EDM and techno sounds, Elvis Crespo became one of the first Latin artists to successfully crossover into the EDM market. His first collaboration with DJ Deorro on the single and global video sensation “Bailar” reached #1 on iTunes and Shazam charts and opened a new generation of audiences for Crespo. The success of “Bailar” would lead to yet another collaboration on DJ Steve Aoki and Daddy Yankee single “Azukita”, which was produced by Play-N-Skillz and earned a Latin American Music Award nomination for “Favorite Tropical Song” in 2018. In addition, Crespo also earned a 2018 Latin Grammy® nomination in for his album Diomedizao in the “Best Contemporary Tropical Album” category, album which debuted #1 on iTunes in the U.S. and Puerto Rico. His current single “Ella me beso” has climbed into the Top 25 of Billboard’s Latin Airplay charts and is quickly becoming an instant viral video sensation.

His versatility and insatiable hunger for exploring new genres and keeping audiences guessing are all part of his trademark style. At least three of his songs (“Tu Sonrisa”, “Píntame”, “Suavemente”) have become worldwide anthems for celebration, regardless of language, and have reached every frontier. “Suavemente”, his most emblematic song, has been played from the neighborhoods in Egypt to concerts in Australia and was the only song in Spanish chosen by NASA in the 2006 Discovery mission.
Elvis Crespo is an artist who’s broken all the rules of music at a dizzying rate and is a clear example of an artist who’s here to stay.
Albums/Singles
***In 1999, he released his sophomore album “Pintame”, which earned him a Grammy® and countless Premio Lo Nuestro awards including “Album of the Year”, “Male Artist of the Year”, “Best New Artist” and “Song of the Year”.
***In 2000, he released “Wow Flash", his third album for Sony, which incorporated his first ballads.
***In 2002 he released “Urbano”, an album which credited him as singer, songwriter and executive producer. The album fused merengue, rap and rock sounds. The single “Bandida” showcases his musical versatility and included urban artist Tempo and DJ Black.
***In 2004, after a two-year break, he released his fifth album “Saboréalo”. The first single, “Hola Enamorada”, debuted at the top of the Billboard Latin charts and earned him a Latin Grammy®.
***In June 2007, Elvis Crespo released “Regresó el Jefe”. The first single, “La Foto se me Borró”, took him back to #1 in Billboard’s Latin Tropical Airplay list and solidified him as a producer. The album also showcased the group “Zone D’Tambora", formed in Puerto Rico by Elvis Crespo in 2007.
***In 2008, he became the first Latin artist to record a live album from Las Vegas, “Elvis Crespo Live From Las Vegas” (CD/DVD), released in 2009. The same year he took the writer/producer role in Zone D’Tambora’s debut album, which topped Billboard’s top-selling Latin albums list and remained there for several weeks.
***In 2011, he released “Monsters”, an album including 12 tracks and produced by Elvis Crespo and Robert Cora. The album showcased the hits “Vallenato en Karaoke” and “Yo no Soy un Monstruo” ft. Vladimir Dotel from Ilegales. It also featured a “who’s who” of artists from multiple genres, creating a danceable fusion of sounds, without losing the trademark Elvis Crespo style.
***In 2013, Elvis Crespo released the album "One Flag", which included the instant summer hit "Pegaito Suavecito" ft. Fito Blanko. The track earned several nominations (Premios Tu Mundo) and # 1 on Billboard Latin Airplay chart. He followed up with "Sopa de Caracol" ft. Pitbull which reached # 1 on Billboard Tropical Airplay.
****In 2016, the DJ Deorro track “Bailar goes viral when Crespo is surprised by JLO dancing to their track in Las Vegas. In less than a month, the video had over 10 million views. Crespo simultaneously launched the song "Escape" with Grupo Manía.
***In 2017, Crespo released "Guayo" with the Dominican group "Ilegales" under his label Flash Music.
***2018, kicked off full speed ahead after his release of "Diomedizao", an album that paid tribute to the late singer Diomedes Diaz. It included 8 tracks adapted from classic vallenato and cumbia sounds to tropical rhythms of merengue. This album debuted # 1 on iTunes in both Puerto Rico and the United States. Crespo would also release the global dance hit "Azukita", alongside DJ Steve Aoki, Daddy Yankee and Play-N-Skillz.